As I commence writing about the prototyping stage of my game so far, I feel an intense surge of frustration at my inability to produce anything. I am such a novice in the area of any type of game playing that I am constantly fighting an overwhelming urge to give up this crazy quest to design my own game. But then I think of Jesse Schell and say to myself “I am a game designer” and slowly the despair seems to dissipate.Enough at least for me to talk a little about the philosophy of objects or OOO, aka object oriented ontology. OOO is a relatively new term which has only been around since Graham Harman wrote about it in his 1999 PHD thesis. My interpretation of OOO is that objects have their own vibe or presence and it is not just our perception of them that makes them real but that they just exist in their own right. Another modern day philosopher who is also a game designer, Ian Bogost,  talks about ‘philosophical carpentry’ which focuses on the making of things or objects. Through the construction of objects we are better equipped to understand their inherent nature or true value, how they are interrelated and the way in which we experience them.

Playing games is just a fun way of finding out what the objects in any particular game are trying to tell us. Philosophically speaking, my game is trying to heighten the awareness of the players around environmental catastrophes through making them go on a quest ‘to save the planet’. The game objects become edifying tools to elicit deeper thinking on environmental issues (hopefully). The problem I now have with engaging in all this deeper thinking is that my prototype sits on my desk ‘as pure as the driven snow’ with not a mark to be seen!

Finally, after much brain gymnastics, I arrived at the basis of an idea for a game. As I have previously discussed the subject matter will be about time travel and at least now I can add a very sketchy outline of the theme. The name for my game will be Wormholes and it is set in the present day.The earth faces a threat of cataclysmic proportions as the earth’s core temperature is climbing and the atmosphere disintegrating and unless someone finds a solution, the earth’s crust will literally melt and all living creatures will be destroyed. 2 wormholes have appeared in the earth’s atmosphere. These wormholes have the ability to teleport matter either 100 years into the past or to a parallel universe.

I still was playing with the idea of a time machine which I wanted to further explore. Using cards, I started to list different types of time machines and modes of time travel. 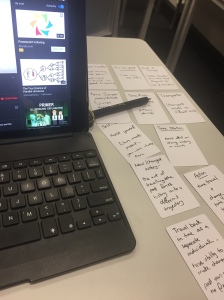 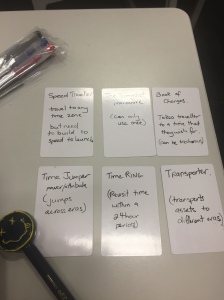 It is such a convoluted topic that the difficulty will be drawing something out which I can then apply to my game. There are many ways that one can time travel (theoretically speaking), and many different ways that the time line can be affected or changed once a time travel manoeuvre has been actioned and at this point I am wishing that I was a Time Lord!

2 thoughts on “D-OOO That To Me One More Game”

What do you think? Cancel reply

"Lines of light ranged in the nonspace of the mind, clusters and constellations of data." Neuromancer (@GreatDismal) .

A resource for the creative career

Welcome to the Machine

Mechanisms of Media and Communication and Other Stuff